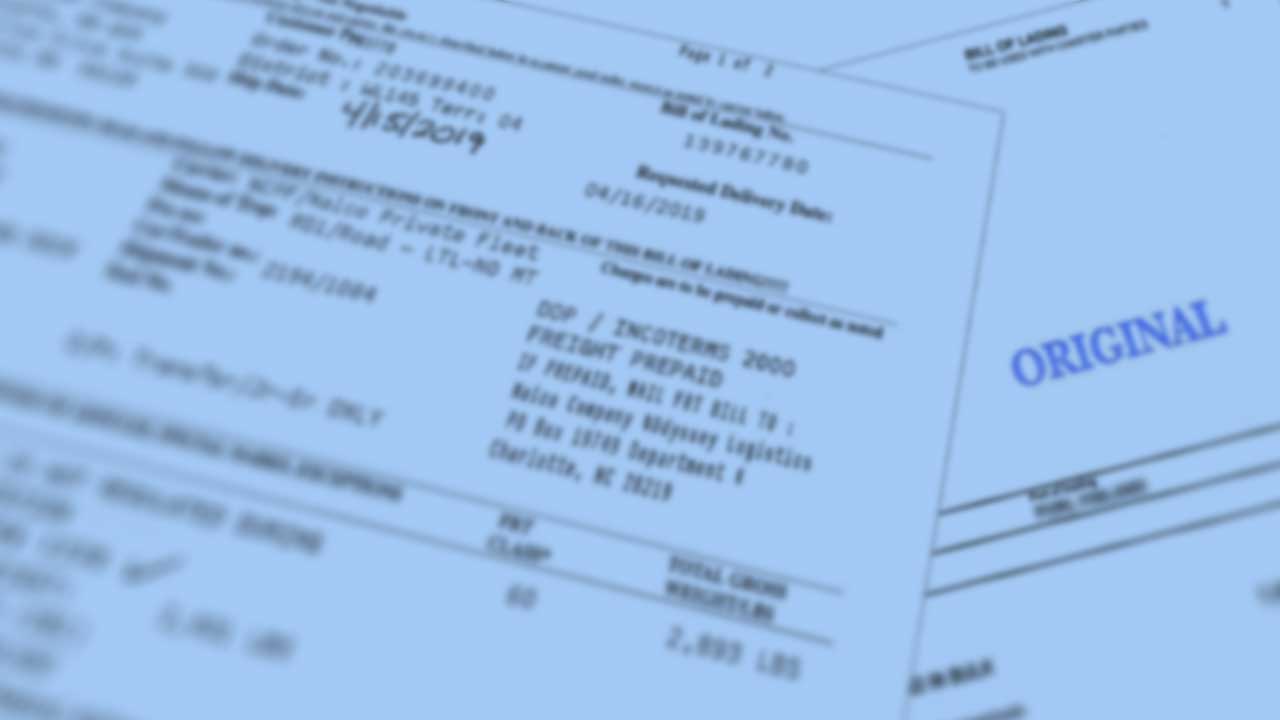 Why Is A Bill Of Lading So Important?

As evidence of your contract with your freight broker, carrier, or forwarder, the details of your Bill Of Lading will determine if your goods move – or not!

Whether you’re choosing less-than-truckload (LTL), ocean freight, or intermodal shipping, most, if not all, service providers won’t ship your freight without a Bill Of Lading or BOL.

What is a Bill Of Lading in Shipping?

Considering how important the BOL is, what is it exactly? What does a Bill of Lading mean? Here’s a specific definition:

A bill of lading (BL or BoL) is a legal document issued by a carrier to a shipper that details the type, quantity and destination of the goods being carried. A bill of lading also serves as a shipment receipt when the carrier delivers the goods at a predetermined destination. This document must accompany the shipped products, no matter the form of transportation, and must be signed by an authorized representative from the carrier, shipper and receiver.

Moreover, the BOL contains more specific relevant information about your shipment to enable logistics providers to process and price their service accurately. These details are (but not limited to):

Do I Need a Bill of Lading?

If you want a recognized carrier to move your goods legally and responsibly – yes!

The Bill of Lading is the receipt of the transaction between you and your carrier. It’s a legally binding document that can also serve as a document of title, which allows the entity holding it to claim ownership of the freight.

Who Issues the Bill of Lading?

A bill of lading is usually issued per shipment or container by your carrier, broker, or forwarder. You just have to fill out the details in the appropriate blank form.

The specifics or type of form will depend on your requirements as the shipper. It can also be determined by the purchase order, kind of products you’re shipping, letter of credit, and many other factors.

When it comes to truckloads however, it’s actually common in full truckload (FTL) for shippers to use their own BOL. Additionally, some carriers will allow their clients to make their own BOL for LTL shipments.

How to Read a Bill of Lading

These details when required must be notated on the BOL or you may risk not having your freight picked up, which could result in a dry run charge from the carrier.

Additionally, if your shipment is LTL, you’ll also need to include the freight class of the shipment.

What are the Different Types of BOL?

Types of BOLs are diverse to cover the vast range of products that require shipping. Depending on the contract, there are different terms used in different shipping scenarios.

For easy reference, here’s a list of common BOL types:

The Order BOL type states that the cargo will only be delivered to the person or party determined by the shipper – often according to the consignee. To ensure safety of delivery, the bill must be verified by the agent or middleman responsible for the delivery. Also considered as a negotiable bill of lading, it is the most used type of BOL in the world.

A Master BOL is issued by the shipping line, trucking company, or basically the owner/operator of the transport vessel. This is also the type of BOL your freight forwarder or broker has with the carrier containing most of the same detailed information about your cargo.

Also known as a non-negotiable bill of lading, this BOL consigns the cargo to one specific person – neither the endorser nor the endorsee is prioritized when claiming ownership of the delivery. More often than not, the consignee has to make an advance payment before they can receive the goods. Plus, depending on the laws of the destination country, he or she may or may not be required to show the original bill upon receipt.

Also known as a negotiable bill of lading, this type defines that the cargo can be transferred from one consignee to another with the consignee’s signature. The consignee is usually a named party pre-determined by either the carrier, a bank, or the importer.

Also known as a forwarder’s bill of lading, this type of BOL is given by the forwarder, broker, or the Non-Vessel Operating Common Carrier (NVOCC) to their clients.

This type specifies the cargo will be delivered to whoever possesses the bill of lading. The consignee may be unspecified originally or be negotiated upon delivery. It’s usually used for bulk shipments released in smaller quantities.

7. Received for shipment bill of lading

This type is given by the carrier confirming that the goods have been received, but not yet laden onto the ship or transport vessel. This is typically used as a temporary BOL when the vessel is late and will be replaced by a Shipped BOL when the cargo is finally loaded on the ship.

This type of BOL issued when the cargo is onboard the vessel and now legally binds the owner of the vessel with the carrier.

The Ocean Bill of Lading allows the cargo to be transported via ocean freight, both nationally and internationally.

This BOL type allows the carrier to transport the shipment freight via land, via roadway or rail, but only within domestic boundaries.

As the name implies, this type is issued by an air freight company or forwarder and is usually considered non-negotiable – unless the cargo is consigned to the order of the shipper.

Denoting a certain condition of the cargo, this type states goods are loaded in good condition and cannot explicitly declare a defective condition of the packaging and/or the products inside. If the shipment ultimately turns out damaged or is missing in quantity, it is replaced by a Dirty BOL.

The Dirty BOL has a clause stating the shipowner can declare the condition of the cargo as “dirty”. Meaning the cargo is indeed broken, or incorrect quantity of goods have been specified, there’s significant damage in the packaging, etc.

14. Through bill of lading

The Through BOL serves as a legal document that allows the shipment to directly pass through domestic and international borders. It may be transferred from one distribution center to another, and be transported across multiple modes of transport. It is also required to include an Inland or Ocean BOL depending on the final destination of the shipment.

Additionally known as a Multimodal Transport BOL, this type states that there will be at least two modes of transport involved when shipping the cargo.

The Direct Bill of Lading is for shipments to be picked up and delivered by the same vessel.

This type of BOL defines that when the cargo arrives at the port before the bill of lading itself, the current BOL is then considered “stale”.

The Surrender BOL is issued by an exporter to an importer and signifies the transfer of ownership once the freight is received.

Using the Correct Bill of Lading: Why It’s So Important

Every detail in a BOL so your cargo must be nailed down to ensure your shipment is delivered with the least amount of hiccups as possible.

Using the right BOL will avoid unforeseen freight charges and unnecessary time constraints – such as the shipment being delivered to the wrong address.

This means the BOL contains all the most relevant details about your shipment including the terms and conditions favorable for you.